Simone in the city 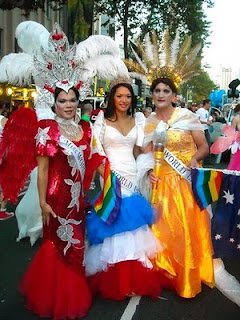 Some of the 'lovely ladies" at Mardi Gras

Well as you all know Sydney is the centre of all fabulousness. And it celebrates the said fabulousness each year with Mardi Gras, a gay pride event that originated out of the police trying to shut down the parade in 1978. In general, if you ever try to tell Aussies they can't do something, this irreverant bunch will turn up in numbers to show that they can. I love that attitude. Speaking of attitudes I loved and fabulousness- for those of you who have yet to have the plearsure, let me introduce you to Lani Wendt-Young's character in her recently published Young Adult Fiction Book- 'Telesa'- the one and only 'Simone'.

"...he strutted along the corridor with all the studied ease of a runway model, stopping often to greet passersby.
"Daahling, how was your weekend? No way! Was he there? Ohmigosh, you're kidding. I hate you! Tell me all about it at lunch. Oh, girlfriend wait up. how was your Friday night. I heard about the V-Bar hmmm, you wicked girl! I know I was busy at home with our faalavelave and doing all the chores going crazy I couldn't get out. See you later! Yoohoo daaahling!"
Like the Queen of England ackowledging her humble courtiers...."

There is no doubt in my mind, that Simone would love Sydney, and Sydney would love Simone- they both have that 'joie de vivre'. So I am very excited to host Telesa's author Lani Wendt-Young on this blog to delve into Ms Simone.

Lani Wendt-Young: Thanks for having me on your blog Sisilia. I haven’t come here solo today – with me is TELESA reader Tim Baice who’s studying at Auckland University. i had this idea of getting a fafafine to give me their feedback on Simone. Tim is way more knowledgeable about the world that the character of Simone has grown up in and I’ve asked him to share his (vivacious and fiery) thoughts on Simone and on the portrayal of fafafine in Pacific fiction….

Simone and the ‘Third Gender’ - “You took a page out of one of our diaries.”

Si-mone has a natural appeal, especially in the way in which you have introduced him in the novel. We as the readers see through Leila's eyes as she is slowly making sense of her surroundings so people who lack experience with Fa'afafige are generally introduced to one - food for thought for people I guess - a really delicious tactic which I find you use in the book a lot - leave people hanging for more. I like how Uncle Tuala's description of Fa'afafige “a boy who is like a girl” just touches the surface, without trying too much to put them into a certain category – it represents a wide view.

I really like Simone's character because there isn't a lot of Pacific fiction published by/for/about Pacific people and I feel that what is missing in the literature are the stories of the third gender - fa'afafine - and if they are mentioned it’s normally just to highlight everything that is apparently "wrong with society" – a deficit lens approaches. I really like how you've written Simone in just to be a natural part of Samoa College, you've normalized it and haven't really made his/her inclusion an issue. I also really liked how Leila conceived of and articulated Simone's character - through her hand movements, the way she spoke, the things she talked about, the natural make up, the lip gloss and did so in a way the clearly painted an image but did not taint Simone's character - I really liked how there was no judgement there - not that you would blame Leila for doing so.

Si-mone reminds me of so many of my mala friends here in NZ, but especially the ones in Samoa and they're the ones that tend to not have their voices heard in stories (this is so predominant in Pacific Research especially research around Pacific youth). The beautiful thing about Telesa is that everyone that reads it is able to take away from it something different according to experiences/tastes/beliefs and the inclusion of Simone is like an acknowledgment of fa'afafines and their role in Samoan society. A lot of people would be able to relate to Si-Mone which is one of the key reasons why I think Simone's character is important. Plus Simone just adds a level of flare that Sinalei or any other back up's aren't able to LOL. (Sorry to all the Sinalei's out there). Simone’s eccentric character is a nice distraction from the pain we all feel (when Daniel puts his shirt back on) or as Leila tries to control her passion for Daniel. The fast talking mouth, the hand gestures, the makeup, the trying to be prettier than everyone else classic classic classic loved it!

Simone is a classic character. The mala at school that befriends and gossips with all the girls, that knows everyone’s business, and is only after the hottest guys at school! Let's not forget the person who does everything to stand out in any way possible especially in relation to the other girls around her. Simone is a loveable character, and I like how he took on a nurturing role to Leila. This was very true to life. A lot of girls gravitate towards fa’afafiges in schools because they say it straight, and I’ve experienced it myself at Uni in terms of fa’afafige being older sisters to younger and inexperienced girls. You could see this in the way Simone fussed over Leila's taupou outfit and then turned out to be best buddies with Aunty Matile - such a realistic character! That's why reading this book had me cracking up because it was like you took a page out of one of our diaries and wrote a character about it (no not the pages about Daniel, and how his shorts sat precariously low on his hips, NOO those pages were private) LOL. So yes it was really easy to connect and appreciate Simone. It was also very realistic to read about Simone's issues with some of the other guys (Daniel having to protect Simone from bullying), which you know is common with fa'afafige so Simone wasn't this glorified ‘Aunty’, he was a real fa'afafige who had endured the same issues most of us do in life.

I also really liked and could easily relate to Simone's caring disposition towards Daniel. How Simone was so protective of Daniel given their history but also at the same time making known his personal feelings of affection towards Daniel. This tension played out quite nicely and seemed so natural. I almost feel like as Simone constantly questions Leila's relationship status with Daniel, his declaration of support for her as taupou accompanying Daniel's solo is part of this, “I'm in love with him but there is nothing I can do, can only dream of it, because the imperfect society we live in, a relationship between he and I could never work kind of thing, so I’m stuck with going along with whatever makes him happy and clearly it’s this magu Leila” LOL.
In summary, Simone's character gives great insight into the role of fa'afige in Samoa. My one suggestion would be that it would have been great to see some fa'afafige lingo in the mix, einjo, nupi, maja, neite, just to add a bit more spice and make her/him that much more real. All part of the "reals" diet.

(You’ll note I used he/she interchangeably. Sometimes when you get this wrong when meeting a Fa’afafige, you can be in trouble! )

From one Daniel lover to another.

Thank you Tim. Love your thoughts on Simone and will definitely be taking on your suggestion of fafafine lingo in Book 2. Can I get some lingo tutorials from you pleeease!?

Without a doubt this is one of my favourite posts so far in the official Telesa blog tour.

I agree Joan - I loved getting Tim's perspective and I always enjoy reading his tweets about his exuberant take on everything from Daniel's abs to Mariah Careys music videos. Tim has made this TELESA publishing journey so much more enjoyable and fun. Thank you Sisilia for having us on your blog! Its now on my bucket list to one day...get to Sydney Mardi Gras.

I love your feedback, Timmy! It felt like an appendix for the book. Which reminds me, must go get my hard copy...

LOL i wondered who would pick up on that one Bina, that was my fave line frm Tim...

Was great being part of the blog tour! Lots of fun!!!

Stumbled onto your blog tonight via your review of the Telesa, really like what you have to say so I've added your blog to my blogroll at samoanwoman.com. Hope you'll continue to blog, I've quite and come back to blogging a couple of times myself also lol.