Who's who in the zoo 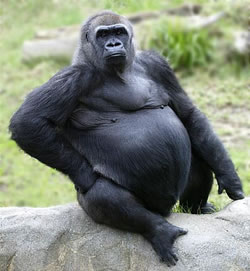 In the weekend we went to the zoo. Not just any old zoo.  The Taronga Zoo, jewel in Sydney's tourism crown, complete with 'bio-geographic' mega-exhibits and committed to conservation and "positive connections between wildlife and people".  Now as a Samoan, I have to admit that my "positive connections" with wildlife have by in large been called "lunch" (or sometimes "dinner"), so you may be wondering which part of this magnificent manifestation of this slightly strange concept appealed to me most... Was it the languorous lazing lions, the swiftly swimming seals or the great giraffes with their improbable necks which afford them spectacular views of the sparkling Sydney harbour? Well, what I really love about the zoo, is how it reaffirms the natural order of things, how it really reminds you who's who.

As soon as we arrive my mum, begins scanning the zoo timetable.  "We need to head to the kids trail so Lagi can pat-a-pet at 10.30."

"The quickest way is left, don't get diverted, we need to go straight to the petting zoo, I really think Lagi will love that."  Having been herded in the appropriate direction, we tramp off in search of pets for Lagi's petting pleasure.

"Don't look left or right, we don't want to be late."  We get there at 10.15.  Lagi immediately starts trying to break the bunny out, by pulling on the large lock. My mum captures about 50 shots of him doing this for posterity while I secretly wonder at whether this experience will imprint on him and he will become a master criminal with super safe cracking abilities.

While I mull over my child's possible future as a super villain, the volunteers turn up. Lots of little ones and their parents are now milling around waiting.  I am jockeyed into prime position by my mum.  The bunny sees us coming and quickly hops to the relative safety of the back of the enclosure.  Lagi, unused to such contrary behaviour to his 17 month old charms, laughs out loud and picks up some straw and confidently holds it out with a big smile to the bunny.  More flashes go off as mum elbows more minors out of the way to catch all the action.

Having petted to his heart's content, we then explore the rest of the farm, there are chickens to chase, and mountain goats to gawk at.  E tua'i le fefe la'u tama - so when I see him starting to toddle after the towering bush turkey, I know it's time to distract him in the traditional Samoan way... with food!   Off we go to a cafe to order carrot cupcakes (with one last longing look at the red velvet cupcakes ... edicts on red velvet and their consumption in front of Lagi, evil red food poisoning and all, had previously been issued).

"Have you only half-finished that coffee, because we really need to get over to the bird show, Lagi loves birds"and we are hot footing it to the other side of the zoo, where Lagi decides he was actually a Raj in a previous life and would rather ride on the stone elephants, then it's hiking over to the "Great Southern Ocean exhibit so he can be delighted by the ducking and darting of the pretty blue fairy penguins, before letting him try to catch carp in the rainforest exhibit. By the 2pm seal show we are all exhausted.  But having secured a seat we decide to stay and watch, Lagi has seen all this before and decides he'd rather snuggle into me and sleep.

He is warm and heavy in my arms and my mind wanders, to how fast he is growing and to how we used to have a lunch date every day. He would come into the city, and no matter what was going on that day, I would duck out of work.  I loved seeing him in the middle of a busy work day, but it wasn't always convenient, and by the time he was turning one, and was happily devouring all sorts of delicious foods wth his very pretty and  very sharp pearly whites, I thought he probably wouldn't miss mummy too much at lunch times.  I had cautiously mentioned my intentions to my mum - Lagi's  primary carer/ enabler/ champion against the world and, in particular, against his neglectful and unfeeling mother mama.  A look full of doubt and worry was immediately cast in my direction to convey just how uncaring I was being, considering such a catastrophic change.

"I breastfed all four of you until you were at least two. It's in the W.H.O guidelines." Hinting at endangering  health and going for guilt are great techniques and can be employed especially effectively when championing your grandchild.

"Yes, I'm still going to breastfeed him, just not at lunch time."

"I think I may have even breastfed you longer, maybe even till three" Apparently, exageration is also permitted when you are proving your point, especially if the person you are making your point to is not in a position to argue as they were only two (or three) at the time in dispute.

Splash! I am brought back to reality as the seal ends the show with a double back flip.  We gather up our things and start preparing to head home. As we walk out with a very tired little boy, past all the exhibits we didn't quite manage to get to, I glance at the gorillas, and smile thinking about their social structure, and how visiting here has reminded me yet again of our own; Here's who's who in our zoo:

I look down at the long sweep of his eyelashes, and think I don't much mind the natural order.